The Icefields Parkway: Road Bike Tour from Jasper to Banff – Diary of a guest – Day 4.

Day 4
It’s chilly as we head for breakfast at Lake Louise Inn’s Legends Restaurant (one of four on-site dining spots at the resort), but the sky is clear, promising sunshine and warm temperatures.

The breakfast buffet is impressive, offering all the fixings for a full western-style breakfast including sausage, bacon and eggs and a whole lot more, and an assortment of continental-style breakfast items like waffles, bakery goods and lots of fresh fruit. It all looks so good!

Travel Plans Gone Sideways
Back at the table, Ben’s not eating. Karen’s got a phone to her ear. Jefferey’s hurrying back to their room for his laptop. They’ve learned just this morning that the airline canceled their flight. Their itinerary is full and there’s not much wiggle room. The atmosphere is tense. Their travel agent is scrambling to re-arrange the couple’s flights to get them to their next destination on time. They’re heading for Whitehorse then on to their Alaskan small ship cruise. Ben will skip breakfast if he has to, to get them to the Calgary airport if they need to catch a last-minute flight out. Karen gets up and hurries away, the phone still at her ear.

A few minutes later, she returns smiling. Their travel agent has worked things out. Karen and Jefferey may even have time to ride all the way into Canmore before having to be at the airport. They’ll decide once they get to Banff.

Bow Valley Parkway is one of the best places to see wildlife in Banff National Park. Moose, elk, big horn sheep and bears are all a possibility. It would be nice to see some sheep.

But we don’t see any sheep. A spunky but confused chipmunk runs in front of Randy’s bike, gets halfway across the road, then changes its mind and scampers back the same way it had come.

Later, we come upon a gorgeous big elk with enormous velvet-covered antlers. Randy tells us the elk shed their antlers in January and begin growing new ones in spring. The velvet carries blood to the developing boney tissue and protects the antlers as they grow. Come fall, the elk will rub against trees to remove the drying velvet and display his shiny, hardened antlers.

We stop at the World War I Internment site which marks the place where a prison camp held more than six hundred men between 1915 and 1917. The memorial plaque tells us the embarrassing truth about why some men were made prisoners here: “The majority were non-combatants, unemployed civilians – victims of the 1913 depression, racial prejudice and wartime hysteria.”

Life was very hard in the camp. The men worked for eight hours a day, sometimes with an additional five hours of walking to and from the work sites. Their back-breaking labour contributed to the construction of the Banff Springs golf course, part of the Bow Valley Parkway, and other national parks roads and bridges. The monument of an interned Ukrainian man with his hand extended in a questioning gesture is a fitting tribute to the shameful and perplexing history of this place. I wheel away from the spot with mixed feelings of remorse and gratitude for those who were wrongly treated in this beautiful wilderness location.

At Castle Junction, we peel off some clothing layers – it’s getting hot! We top up our water bottles and have a snack while Ben shares some news. Turns out that six kilometres beyond Castle Junction, the road was closed because crews were still clearing trees that blocked the road after Friday night’s storm. I find out later from a Parks Canada report that more than 100 trees had been blown down. We’re thankful for finding out, but we’re sad to have to leave the beautiful Bow Valley Parkway.

Vermillion Lakes and the Legacy Trail
Ben reroutes our group onto the Trans Canada Highway. It’s busy and noisy but the shoulder is wide and there are no hills to climb. We travel single-file for about 40 minutes before exiting onto the Vermillion Lakes Road. This quiet stretch of road is a popular drive from nearby Banff. Benches invite visitors to take in the scenery. Sun bathers bask on one of several docks. Three kayaks ply the shallow waters at a leisurely pace, breaking up the reflections of nearby Mount Rundle and Sulphur Mountain.

The air is fragrant with the heady scent of blossoming silver willow and balsam poplar as we follow the road into Banff and the end of our tour at the Banff railway station. We stop at the edge of town and position ourselves on and around the new Banff sign – a playful typographic letter-sculpture.

At the railway station, we say goodbye to our new friends as they head down the Banff Legacy Trail to Canmore. It’s hard to see them go and our hearts go with them. As Ben puts away the bike I’ve been riding he says, “One day they’re all strangers, but by the end of the first day, they’re all best friends.” He’s done this long enough to know that’s just how it is.

We thank Ben for all he’s done to make this an extraordinary tour for us. We’ve ridden through some of the most outstanding wilderness Canada has to offer that’s accessible by road bikes. We’ve seen grizzly bears, black bears and elk. We’ve touched the clouds, felt the rumble of glacier meltwater rushing toward a distant sea, and breathed some of the freshest, purest air on the planet. And we’ve shared these moments with a wonderful group of people who’ve become our friends.

In short, we’ve had an awe-inspiring experience that will be with us for a lifetime. Thanks Ben for this unforgettable Mountain Madness tour! 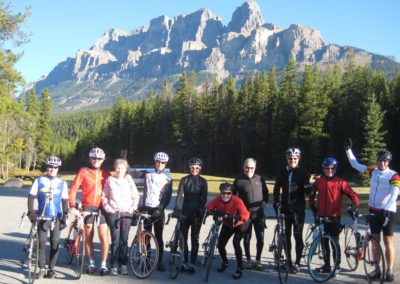 32.By the end of the tour you’ll have new friends for life 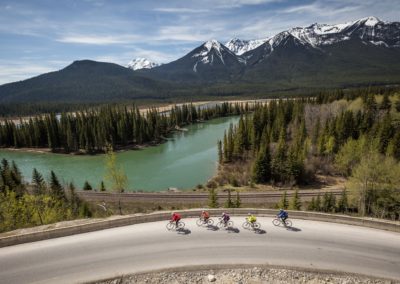 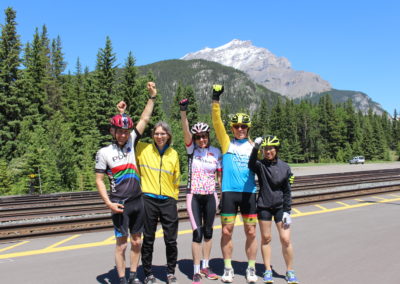 The crew finishes the ride in Banff 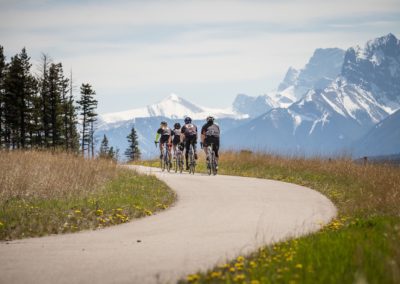 36. Enjoy riding on some traffic free bike paths during the tour

Legacy trail between Banff and Canmore