The Icefields Parkway: Road Bike Tour from Jasper to Banff – Diary of a guest – Day 3

Day 3
I get up the next morning, It’s still early and breakfast won’t be for another hour, so I decide to stroll the grounds around The Crossing. The motel is set back on a hill, away from the highway and the expansive restaurant and gift shop.

I love flowers and I’m admiring the daffodils, tulips and grape hyacinths when I hear a sudden whirr. Rufous hummingbirds, with their ruddy backs and ruby-red iridescent throats are jockeying for position at the hummingbird feeders that hang at the windows. The feeders are a thoughtful gesture that enhances my enjoyment of the wilderness setting of this beautiful resort. But I’m amazed that the tiny birds are already active in the cold mountain air of early morning.

I stroll by the life-size bronze elk that stands in the landscaped courtyard in front of the guest lounge. And step inside the building. The big, leather sofas look inviting, but I sit down at the computer and get on the internet to check the weather forecast. It’s zero degrees Celsius, but the skies should be clearing later in the day, with an expected high of 14 degrees – perfect for cycling!

After a filling smorgasbord breakfast, our group meets together back at our rooms where we load our gear in the van and get instructions for today’s ride.

Bow Summit
The greeting at the top of Ben’s map says, “Good morning, super legends!” I’m not sure I’m feeling quite like a “super legend.” To be honest, today’s the day that worries me most. Today we climb the hill to Bow Summit, which is 39 km from The Crossing, pretty much all uphill. The grade isn’t too bad and I reassure myself with the number Ben has marked on the slopes. The worst is 6% – I’m not quite sure what that means, but I know it’s less steep than the 8.5% grade of some of the previous day’s climb.

The climbing starts right away, but it’s not too bad. Anyway, I’m totally pre-occupied with the stunning vistas that are spreading out around us as the clouds disperse and the temperature rises. The sunlight breaks through from time to time revealing dramatic contrasts between yesterday’s snow that now glistens on the mountains and evergreens, the somber dark grey rock, and the indescribably blue sky. This is what we come to the mountains for.

Wildlife Viewing: Bears, Bears, Bears!
As the day improves with each pedal stroke, I start thinking about wildlife. Aside from the  robins and a raven or two, we didn’t see any wildlife yesterday. The animals will likely get moving today. Perhaps we’ll see some sheep.

Then I think, What’ll we do if we see a bear? I’ve lived in rural areas in different parts of Canada my whole life and I’ve seen lots of bears, but I prefer seeing them from inside a vehicle or building. A few times, I’ve come upon bears while hiking, cycling or running. Except for one occasion, every time I’ve seen a bear, it has run away.

It’s not the bears that most concern me, now. It’s the people around the bears that worry me. When bears or other wildlife are spotted along roadways in the Rocky Mountain national parks, drivers pull over on both sides of the road. Although they shouldn’t, people often get out of their cars with their cameras. Some cross the road. Some approach the animals, trying to get the perfect close-up shot.

As I’m mulling this over, sure enough – it happens. A car pulls over onto the shoulder just ahead of us. I spot a black bear just off to the right, grazing.

On-coming traffic pulls over to our left. Cars from behind pull off the road just ahead of us. Shoulder checking quickly, we slow right down and move into the centre of the lane, watching out for opening doors and cars pulling back into the driving lane. All the while, I’m trying to watch the bear from the corner of my eye.

In no time at all, we’re past it. But this turns out to be our big day for bears. By the end of the day, we’ve seen three bears, up close.

Some time later, while focusing on a crest just ahead and pushing the pedals toward it, I catch a glimpse of a massive black shape slightly down and to the right of me. It’s close. There are no cars parked on the road side. Then I hear Mary’s voice just behind me. “Bear,” she says in a low tone. “It’s a bear. It’s big.” The bear looks at Mary briefly and goes back to grazing.

The big and scary Bow Summit climb, turns out to be big, but not so scary after all. Ben is waiting at the summit, camera in hand, and a high-five for each of us. We turn off the road and ride up to the Peyto Lake viewpoint, for what Ben calls the “bonus round.” It’s steep, but because there’s still snow on the ground (due to early season conditions), it’s closed to traffic and far less busy than it will be later in the season. We admire the turquoise waters of Peyto Lake far below us and look back down the valley toward the day’s starting point. I have to admit, I’m impressed with both the horizontal and vertical distance we’ve covered already today.

Mountain Madness Tours: Unbeatable Support and Service
With Bow Summit behind us, I feel like I can relax. We cruise downhill to our lunch stop at Bow Lake. The food table is laden with all kinds of goodies and there are thermoses full of steaming hot water for tea. I climb into the trailer and sit on the floor to stretch my quads. Ben’s bike trailer is a slick set-up with bike carriers mounted on the wall and a custom-built food storage/buffet table that slides out on rails.

Just then, Ben steps by me to retrieve a piece of gear from the back of the trailer. He pokes his thumb over his shoulder and asks, “Would you like a yoga mat?” I turn to where he’s pointed. A neatly rolled yoga mat hangs from a hook at the top of the wall. I’m impressed with how well this tour has been organized. Ben has really thought of everything for the comfort and enjoyment of his guests.

The rest of the ride toward Lake Louise is what Ben has termed, “downdulating,” that is, mostly downhill with a few of what he calls “whoopsies” hills or “little bumps.” A strong head wind blows against us and we have the novel experience of pedaling hard to get any speed going downhill. That’s the nature of mountain riding. As the air heats up on the valley floor it rises in updrafts during the day. In late afternoon, the air at the peaks cools and settles for the evening, causing strong downdrafts as the cooling air rushes downhill.

Our ears have become accustomed to the sounds of nature: waterfalls and creeks flowing over boulders, the song of the hermit thrush with its glass-flute tones and the wind’s song as it plays in the evergreens.

Lake Louise Inn
The downhill cruise into Lake Louise is hugely rewarding. It’s 4:30 in the afternoon, the sun is shining and the robins are singing. The two big passes, Sunwapta and Bow, are behind us and we’re just 60 downhill kilometres from Banff.

The Mountain Madness van is waiting for us in the parking lot of the Lake Louise Inn. We swing by the mass planting of red and white tulips and drop into the big red Adirondack chairs for a group picture.

Ben Drives us to The Station Restaurant for dinner. The building was originally constructed in 1909 as a Canadian Pacific Railway station. Many original features have been retained like the narrow-strip wood floors, the massive fireplace and big leaded glass windows. We wander around the building and look at railway memorabilia in the gift shop before settling down to a delicious meal.

After dinner, Ben drives the group to Lake Louise and Moraine Lake. There are still lots of tourists milling about at Lake Louise when we get there. It’s not surprising though. A trip to the Canadian Rockies would not be complete without taking in this world-famous turquoise blue lake and the spectacular mountain peaks that frame it. A short drive to Moraine Lake is like icing on a cake and a rewarding way to end this day.

To read about day 4 of the journey click here. 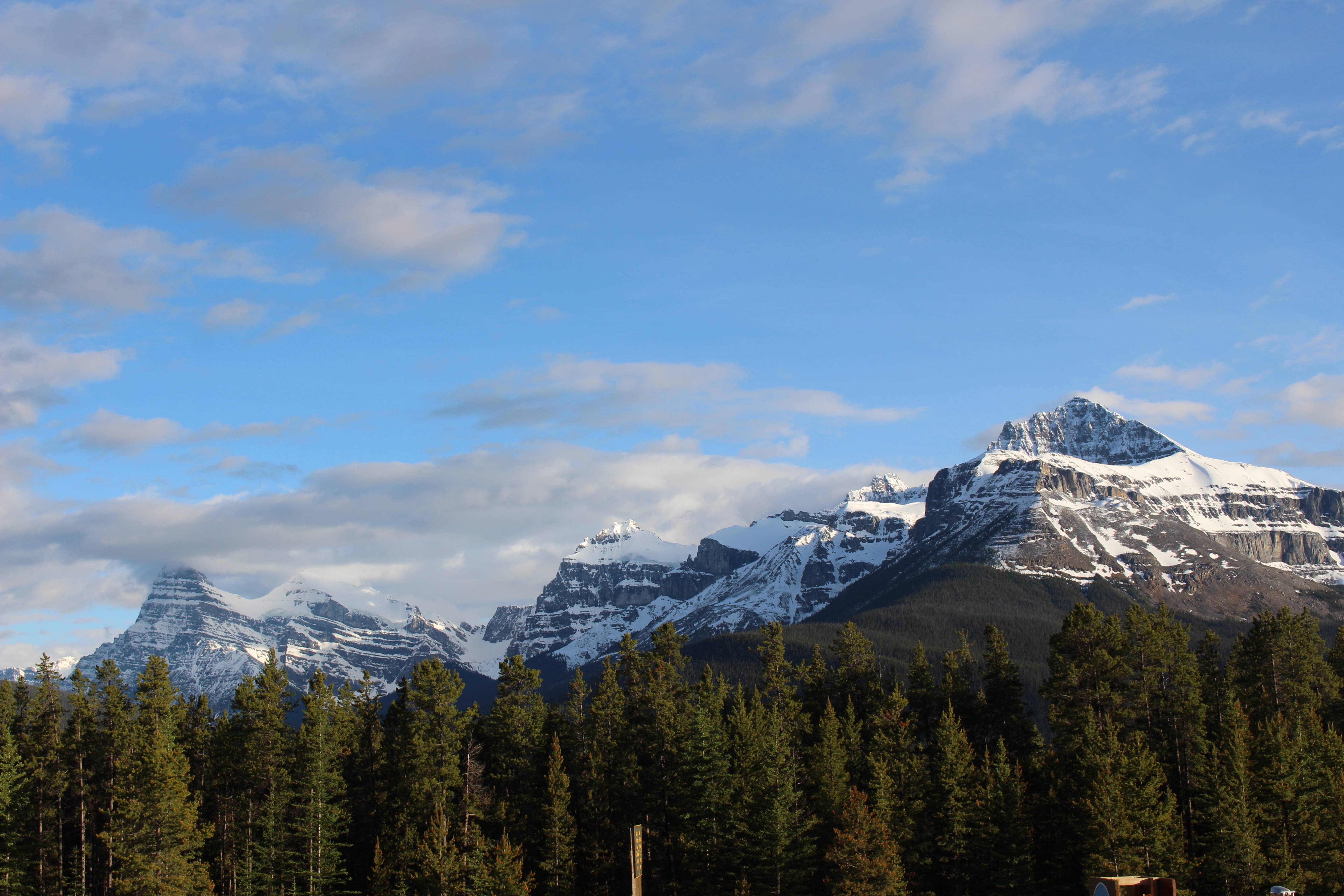 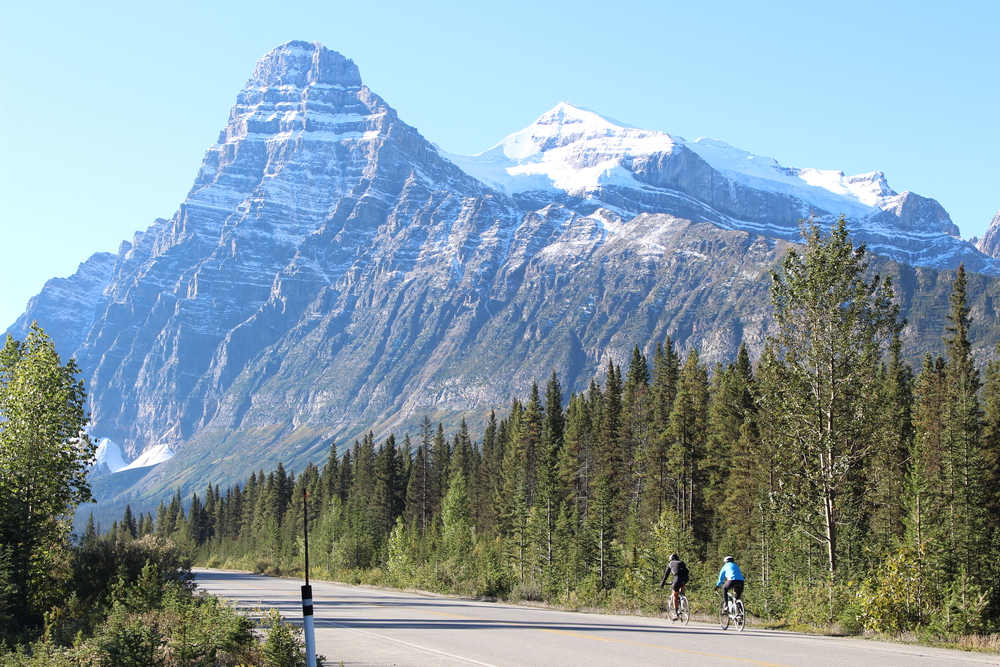 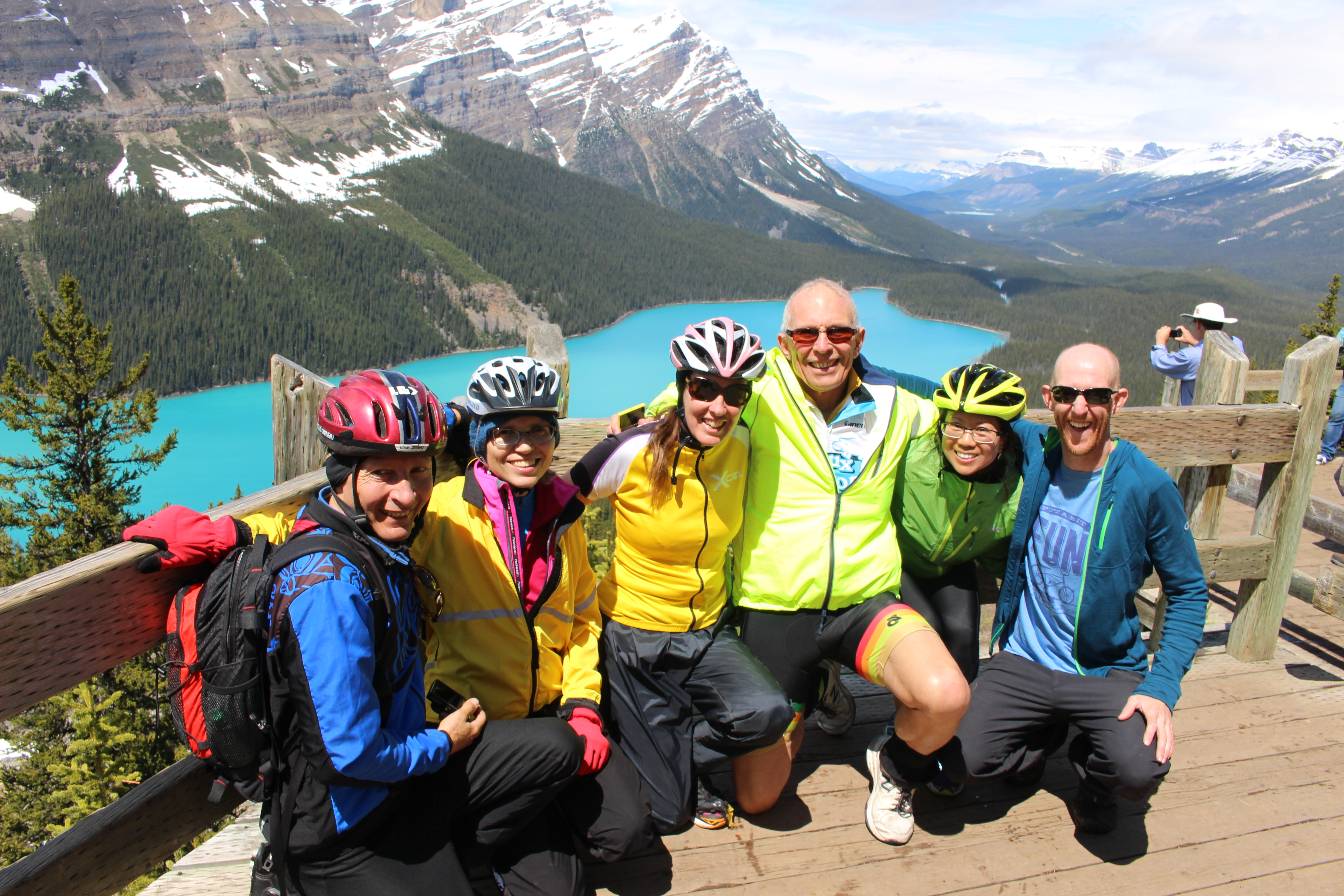 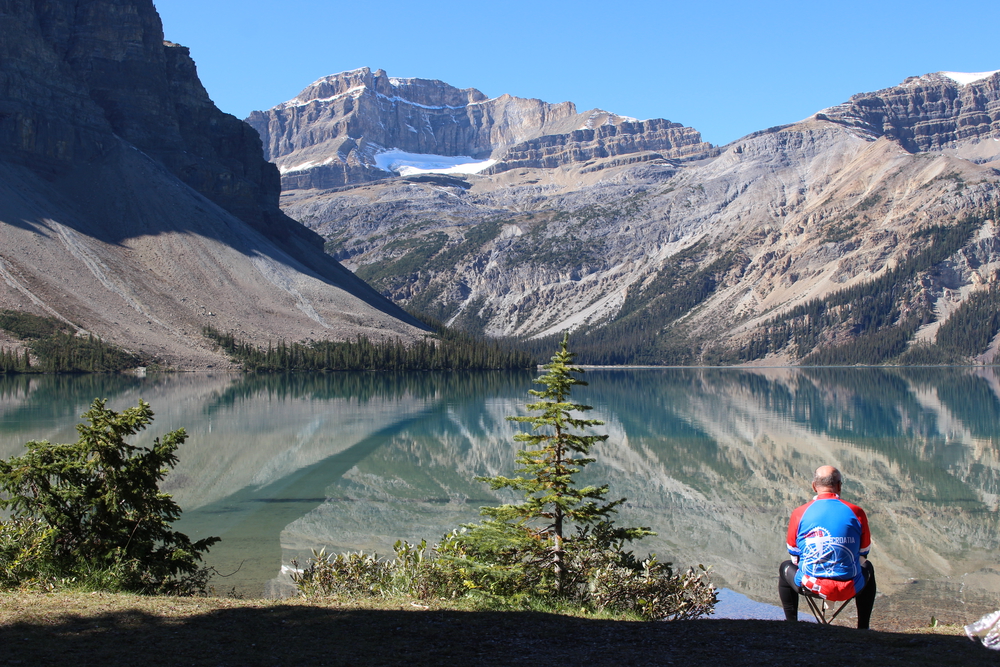 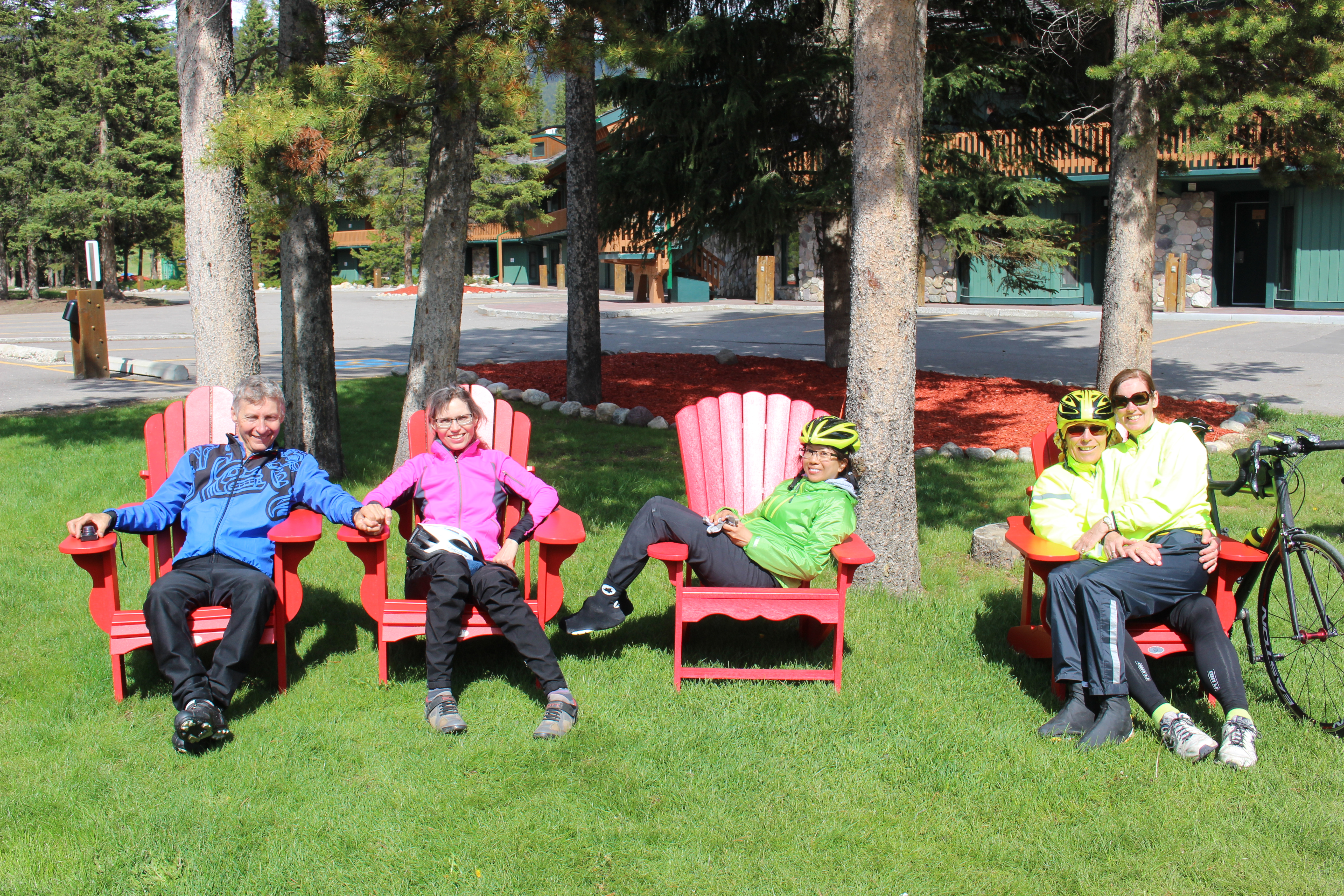 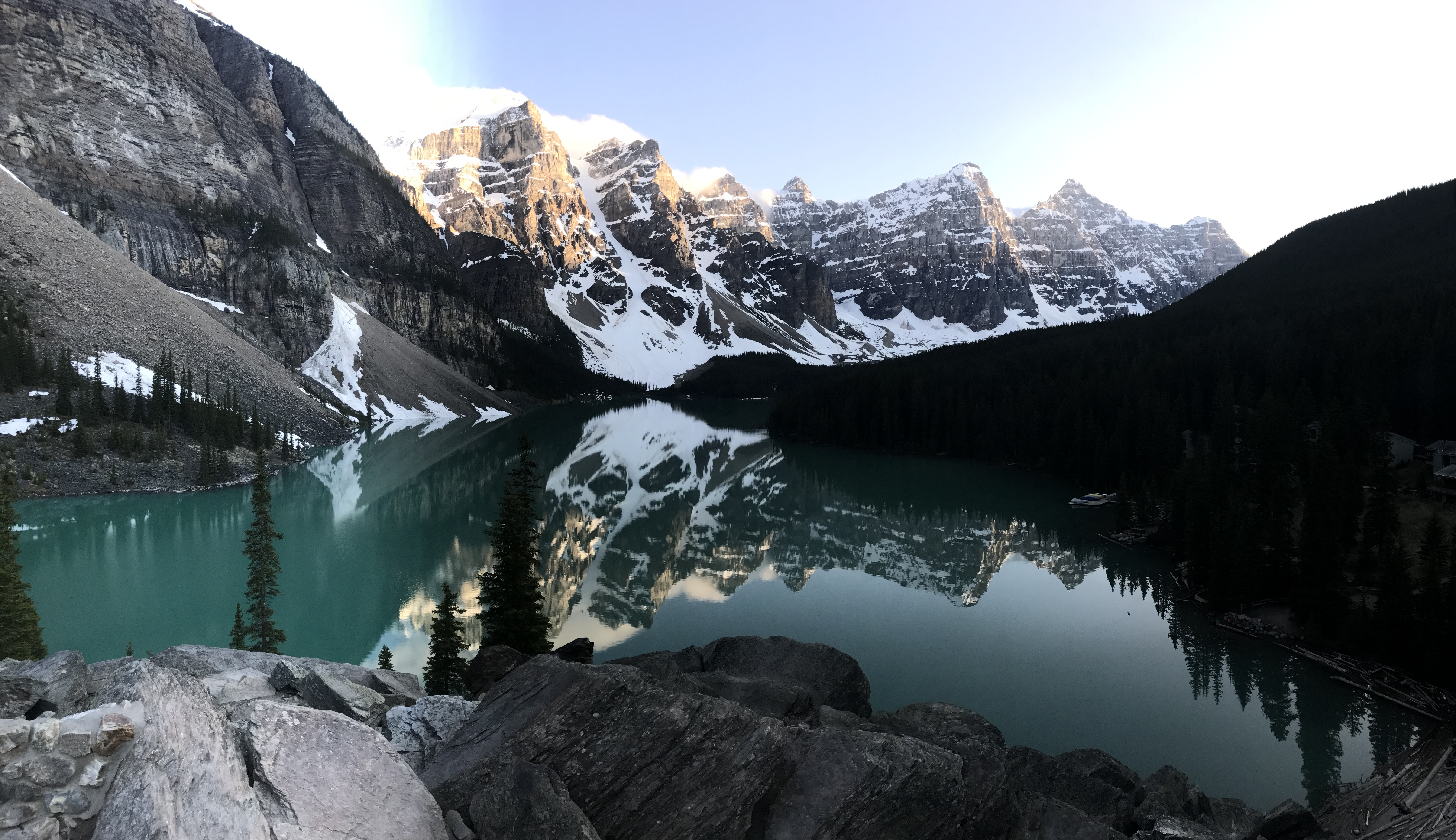