The Icefields Parkway: Road Bike Tour from Jasper to Banff – Diary of a guest – Day 1.

The Icefields Parkway: Road Bike Tour from Jasper to Banff
By Tammie Burak

I had the pleasure of joining Ben Johnson for a Mountain Madness road bike tour from the town of Jasper in Jasper National Park to Banff townsite in Banff National Park along the Icefields Parkway the second weekend of June. This scenic tour of the Canadian Rockies offers the best of wildlife viewing, glaciers, waterfalls, great food and a chance to make new friends.

Day 1
My husband Randy and I meet Ben and our trip-mates in Jasper about noon. We’ll be riding with Jefferey, Karen and Mary. Jefferey and Karen are from Sydney, Australia, and have included this tour as part of their western Canada adventure. Mary is world-traveler from Vancouver, BC. She’s on a quest to tick off as many items on her Canadian bucket list as part of her personal Canada 150 celebration. After introductions, we try out the bikes we’ll be riding and make adjustments. Ben puts the pedals I’ve brought on the rental bike I’ll be riding and adjusts the seat for me.

Rent a Bike: Ride from Jasper to Banff
The rest of the crew look like they’ve been around road bikes all their lives. They’re outfitted in riding gear, complete with cleated shoes. It’s easy to see, they’re ready for this.

On the other hand, I’m feeling a little nervous about this ride. First of all, it’s raining lightly, not heavy enough for full rain gear, but enough to make me wonder how wet I’ll be by the end of the day. I’m a little concerned about riding with traffic on the mountain highways. And I’m wondering if I can really do this. I know there are some big hills, also known as mountain passes, that I’m not completely sure I’ll be able to climb. And then there’s the distance – roughly 300 kilometres over four days.

Ben swings out the back door of his fully outfitted bike trailer so we can look at the map for Day 1 of the tour. We’ll be riding 56 km to Sunwapta Falls and our accommodations at Sunwapta Falls Rocky Mountain Lodge. He goes over the route, cautions us about riding too close to the white line and points out our first check stop.

“I’m a little worried about the climbs,” I admit. “I’d hate to make everyone have to wait.”

“No worries,” Ben says cheerily in his Australian accent. “I’ve got a good feeling about this.”

In a few quick minutes, we’re out of Jasper and on the world-famous Icefields Parkway. We’ll ride 56 km on this first day. The profile is a gradual uphill climb with only one big hill. The mellow start is the perfect way to ease into the daily riding routine and get familiar with the rental bikes.

Technical Support
We haven’t been on the road when I notice something funny about the way the bike feels. My rear tire has gone flat. Randy grabs the pump that’s attached to the bike and puts air in the tire and we get rolling again. But a few minutes later, it’s flat again.

Mary grabs the two-way radio from the carrying case on her bike and radios Ben. There’s no reception for cell phones on this tour, except for at Jasper and Lake Louise, so Ben provides two-way radios for riders. “Let’s get this tire off,” Randy suggests, “so when he gets here, it won’t take as long to get it fixed.”

As we’re working on removing the tire from the rim using tools from the fanny pack, we also keep trying Ben on the walkie-talkie. Finally, we get a response. It’s crackly, but Ben tells us he’s on his way. When he arrives a moment later, he grabs a wheel with a fully-inflated tire already on it and makes the swap for the flat one.

Ben throws our bikes into the trailer and drives us ahead so we can ride with the group. The flat tire has only cost us a few minutes but the other riders are making good time and it would take us a while to catch them.

The clouds are low, concealing the spectacular views, but at our first rest stop, nobody seems too bothered by the weather.

“Marvelous,” Jeffery says, filling his lungs with the fresh mountain air, as he looks admiringly at the glaciers just visible through a break in the clouds. “Just marvelous.” After a brief stop, he and his wife Karen set a brisk pace and quickly pull away from the rest of the group.

Back on the road, we ride for a while before spotting Jeffery stopped on the shoulder just ahead of us. He’s got his camera out and snaps a photo. We watch with admiration as he hops back on his bike and quickly closes the gap between us and Karen who is already cresting the hill in the distance. He’s a powerful rider.

A Bear
At the next stop, Karen is excited. “Did you see the bear?” she asks.

While Jeffery was taking our photo, Karen had kept on riding and somewhere on that hill just off the shoulder of the road, she’d seen a grizzly. It had been eating grass as she passed, but apparently, it had decided not to stick around to see the rest of us and had wandered back into the woods.

Ben is waiting for us at the Athabasca Falls viewpoint. He’s got the trailer open and a great spread of snacks is waiting for us. There are fresh fruits, trail mix, and a variety of energy bars and energy gels. There are also gluten free and dairy free options for those of us who need them. Fresh water is available at a spout on the end of his deluxe grub box. We’ve been riding for a couple of hours and I haven’t eaten since breakfast. I grab a Cliff Bar and some grapes. We’ve got 26 km uphill before we get to Sunwapta Falls where we’ll stop for the night and I’m grateful for this opportunity to refuel.

We’ve got time to settle into our rooms, shower, and change before supper. Then we walk the short distance to the lodge’s restaurant. Our server fills glasses and sets a tray of steaming loaves on the crisp white linen table cloth.

Four of the six of us in our group have special dietary needs which we informed Ben of when we filled out forms as part of the booking procedure for this tour. Still, ordering a meal is a bit of process and the server relays questions from our table to the chef and returns with answers from the kitchen several times before everyone is satisfied. “He’s got the table from hell, hasn’t he?” Jefferey quips in his Aussie accent. But our server’s a gem and doesn’t lose his smile in all the back-and-forth trips he makes.

The three courses are beautifully presented and the food is every bit as delicious as it looks. The butternut squash soup is a hit at our table, with its rich Asian flavours, drizzled with garam masala oil and topped with a dollop of thick coconut cream.

We take a short after-dinner walk to Sunwapta Falls. There are no daytime tourists around, only our group and there’s nothing to distract us from feeling the immense power of the water as it rumbles below the bridge deck that crosses the narrow gorge. We watch a resident raven that apparently makes its living gathering up goodies from rocks at the edge of the eddies and has a roost in a crag of the rocky gorge. The bird looks right at home in the misty atmosphere above the falls.

A plaque at the protective railing informs us that there are 14 species of fish below the falls and one above, the bull trout. One look at the roiling water as it squeezes into the chute and drops 18 metres (about 60 feet), gouging holes in the rock as it goes, will tell you no fish is going to make it up those falls to the river above. The plaque suggests that under flood conditions in the past, the ancestor of the Sunwapta River bull trout might have swum upstream beyond the falls. Or, humans may have planted the fish in the river above the falls to be a food source. Either way, the presence of bull trout above the falls is an intriguing mystery. 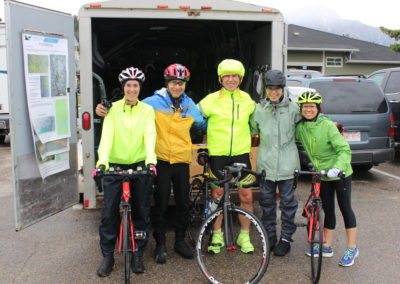 Tammie and crew ready to ride in Jasper 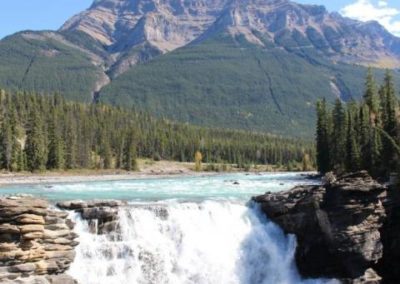 Athabasca Falls and Mt Kerkeslin in the background 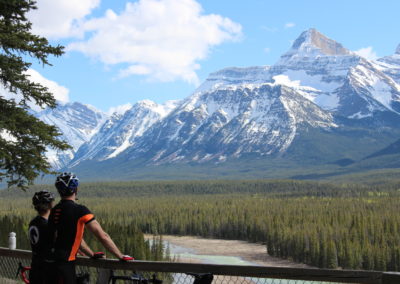 11. Reconnect with loved ones 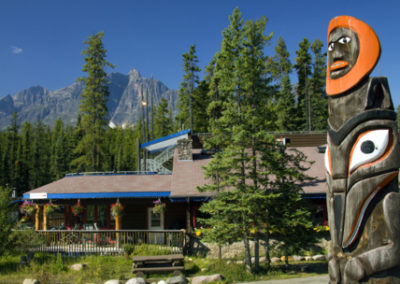 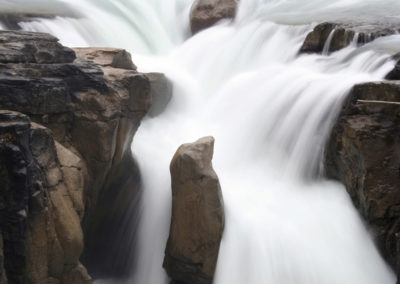 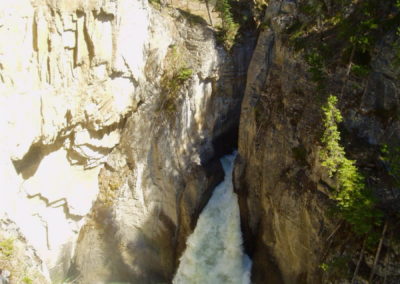