The Icefields Parkway: Road Bike Tour from Jasper to Banff – Diary of a guest – Day 2.

Day 2
There’s snow on the ground the next morning. “Oh, no,” I think. “Not good for riding.” I mentally compare my mountain bike back home in the garage with the road bikes our group is riding on this tour. A mountain bike has big knobby tires that handle wet conditions with ease. A bit of snow, even four or five centimetres (two or two-and-a-half inches) like we’ve had last night, wouldn’t be much of a problem for a mountain bike.

But a road bike is different. Its narrow, high-pressure tires are smooth and have minimal tread. This kind of tire means little resistance on the road, making a road bike swift on pavement and a joy to ride on this kind of a tour, in good weather conditions. But riding a road bike on wet roads can be tricky. Today there’s snow and likely ice, as well. The snow does not bode well for the day’s ride.

Unusual Weather in the Canadian Rockies
Karen, a native of Sydney, Australia, says at first, she was excited to see snow outside her window. But her excitement quickly dampened and was replaced with dismay as she considered what snow would mean for cycling.

Although snow in the Rockies in June is not unheard of, it’s a rare occurrence. “This is the first time we’ve had snow while on tour,” says Ben and offers to shuttle the group ahead to a snow-free zone. The riders are game for it, though and decide to give it a try.

The profile of the day’s ride is something Ben refers to as “updulating,” similar to an undulating terrain, but with a more pronounced upward trend. In other words, it’s a steady climb right from Sunwapta Falls to the top of Sunwapta Pass.

The wide shoulder has little snow in most places to start with, but as the elevation rises, so does the snow accumulation on the road.

Ben has the van parked at a pull-out near the Glacier Skywalk. The glacier is shrouded in a heavy veil of cloud. The air is damp and cool. Laughing tourists are throwing snowballs at each other and taking pictures.

Karen and Jefferey are first of the group to pull up to the van. They seem undaunted by the weather and after a short stop to pull on some extra clothes, they’re ready to go again.

Our group gets a lot of stares from the tourists. A young man, surrounded by his family, approaches the group.

“We are from China,” he says in good English. “My mother rides a bike at home. Could she please have her picture taken with you?”

Karen graciously poses with the family. The mother places her hands on the handlebar of Karen’s bike and beams with joy.

“It happens quite often,” Ben explains, as the visitors return to their rental vehicle. “People want to have their picture taken with our riders.

Mary does not strike me as someone who gives up easily. A long-distance competitive runner, she’s added this tour to round out her visit to the area and is planning to take part in the Banff Marathon next weekend. But she’s new at road biking and a steep ascent in the current weather conditions is too much and she knows when to call it quits. She settles into the warm van for the rest of the uphill climb to the lunch stop at the Columbia Icefield Glacier Discovery Centre.

By noon, the snow on the road has melted and the sun begins to shine again. Following lunch, there’s five more kilometres of climbing to Sunwapta Pass, then it’s all downhill to The Crossing Resort where we’ll spend the night.

Big Bend, Icefields Parkway
A highlight on this downhill stretch is Big Bend, the hairpin curve, or switchback, that eases the descent of the Icefields Parkway onto the valley floor. The North Saskatchewan River, Cirrus Mountain Viewpoint provides a great perspective of this spectacular section of the Parkway.

Nevertheless, the ride downhill is fairly steep and the shoulders narrow as guard rails squeeze the road between rock walls and cliffs that drop into the gorge below.

“How did you like the ride down Big Bend?” I ask Jefferey later.

“Great!” he says with a broad smile. “It was really great!”

The Crossing Resort
Flower beds, colourful with blossoms, grace the grounds at The Crossing Resort. The nodding daffodils remind me that it’s spring in the Canadian Rockies. Snowy weather can’t last for long this time of year. The sky is clearing at the end of the day and no matter which direction you look, there are stunning views of gleaming snow-capped peaks. Breaks in the cloud hold promise of brighter skies for tomorrow.

To read about Day 3 of the tour click here. 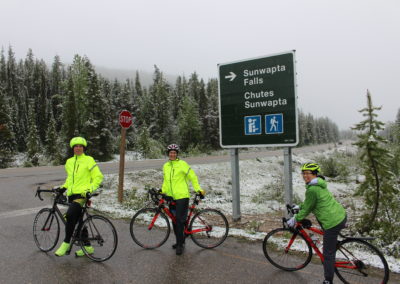 Unexpected snow in the morning 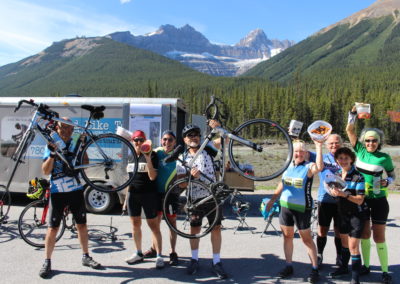 First rest stop of the day. 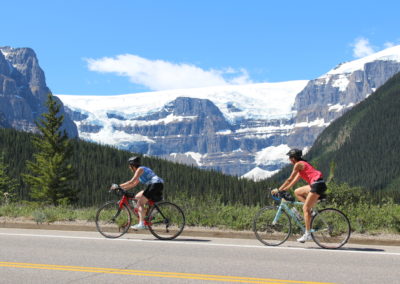 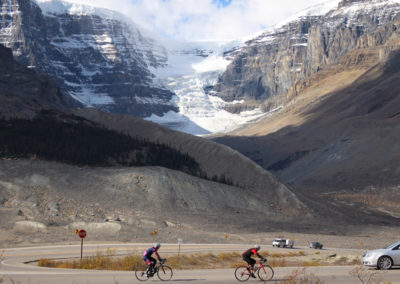 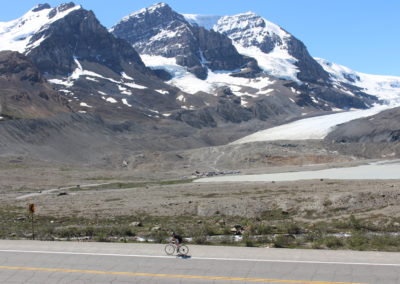 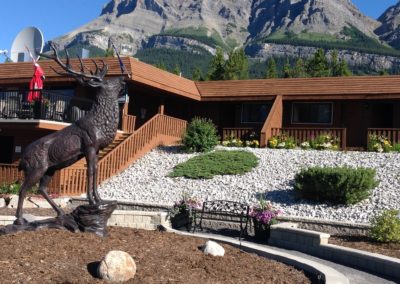 Beautiful surroundings at The Crossing Resort 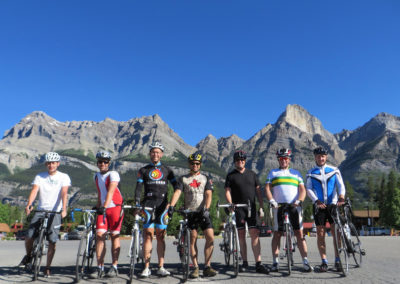 Mt Wilson towers over the hotel

Mt Wilson towers over the hotel 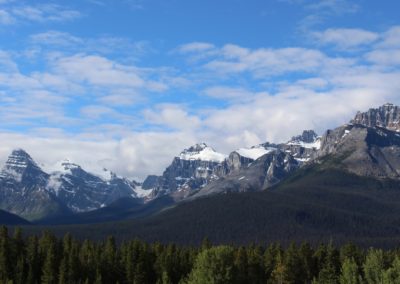 The mountain vista in front of the hotel

The mountain vista in front of the hotel