Peaks of the Parkway – Part 1

Peaks of the Icefields Parkway

“A new world was spread at our feet; to the westward stretched a vast icefield probably never before seen by the human eye, and surrounded by entirely unknown, unnamed, and unclimbed peaks.”
J Norman Collie, 1898

It may be hard to imagine now, but the Columbia Icefield and surrounding peaks have only become accessible within the last century. When J Norman Collie and his climbing companion Hermann Woolley viewed the icefield from the summit of Mount Athabasca in 1898, it was like discovering a whole new world. The area was remote and difficult to reach. There were no roads and no railroads. Fur trade routes and First Nations trails were to the north and to the south. The icefield was in no-man’s land. It’s no wonder Collie believed he and Woolley were first to view the awe-inspiring icefields in 1898.

Since that time, the area has opened to adventurers and explorers and most peaks now have names. Some, in fact, have had several names. This list tells the stories behind the naming of some of the most significant peaks and geographical features along the Icefields Parkway.

Huge thanks to Dave Birrel of www.peakfinder.com for allowing us to borrow content from his amazing website. Please visit this website to find out everything you’d want to know about almost all the Mountains in the Rockies.

This is Part 1 in a series of 6 posts which all together will cover 60 of the most scenic and interesting mountain peaks that you’ll ride past during the tour. Enjoy!

1. Pyramid Mountain, 2766m (9075 ft)
Pyramid Mountain is the highest peak in the vicinity of Jasper Townsite. From Disaster Point, downstream on the Athabasca River from the peak, it is perfectly symmetric, with long evenly sloped ridges to the north-west and south-east.

Snow tends to accumulate on the face which is seen from Disaster Point and generally lingers into mid-summer providing a striking contrast to the other nearby peaks.

The mountain was first climbed by Rev. George Kinney and Conrad Kain. Pyramid Mountain suffered some abrupt erosion when the elevation of the mountain was reduced by ten metres in order to place a telecommunciations tower is now located on the summit. The tower was removed in 2004.

Prior to James Hector”s visit, the mountains was previously known as Priest”s Rock and the name remained in use for a while afterwards. In their book, “The Northwest Passage by Land,” Milton and Cheadle describe their trip through the mountains in 1863, writing, “To the west, the Priest”s Rock, a pyramid of ice, shone brightly above a dark pine-clad hill.”

The peaks of the Victoria Cross Range are gently contoured and have a reddish-orange hue to them that comes from the oxidization of iron minerals that are found in the rock that forms much of this range. They are of Pre-Cambrian age, the rock being significantly older than the mountains to the south. Most are made of rock that was formed over a billion years ago. Composed largely of gritstone (sandstone, with the addition of grains of feldspar and mica) and slate, they are “softer” than those to the south and erode more easily, leaving a more rounded and worn profile. 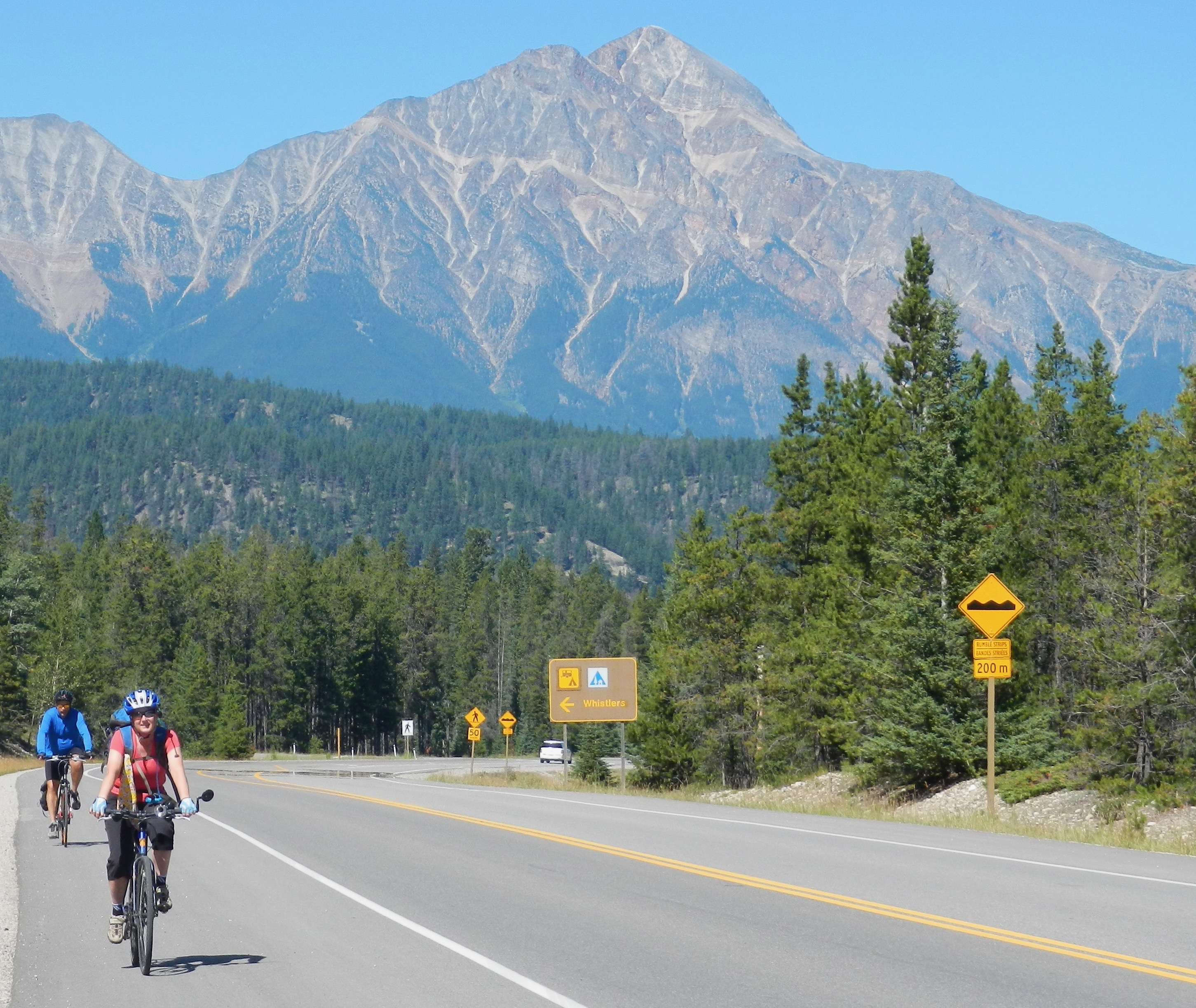 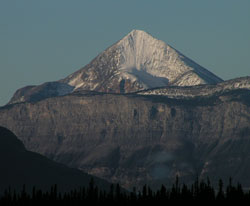 It was also called Fitzhugh and Geikie. Fitzhugh, Jasper’s original name, was the name of the Grand Trunk Pacific Railway’s president and general manager. The name Geikie comes from Scottish brothers, both geologists, who were part of Scotland’s Geological Survey in the late 1800’s. James Geikie is known for his studies on glaciation.

The mountain was given its official name in 1916, just five months after a British nurse, Edith Cavell was executed by German soldiers. She was convicted of treason for helping 200 British, French and Belgian soldiers reunite with their armies after having been cut-off by German forces in German-occupied Belgium.

In 1924 a road was built up the Astoria River valley to beyond Cavell Lake, allowing access to the base of this impressive peak. Although our current business license with the national parks doesn’t allow us to guide cycling groups up this road (mostly due to it’s narrow and winding nature) If you have the desire and some extra energy you can ride to the base of the mountain yourself. We highly recommend this if you’re ever in and around Jasper with your bike. It’s quite something to approach this impressive peak from the unique perspective of a bike. Be prepared to be seriously humbled.

In Aug 2012, Ghost Glacier (an impressive hanging Glacier on the north-face of Cavell) collapsed exploding into the lake below sending a tidal wave of displaced water, rock, ice, debris and mud down the valley and access road. This unbelievable force consumed, gobbled and covered hiking paths, parking lots and outhouses. Thankfully this happened at approximately 5.30 in the morning leaving no eyewitness accounts of the monumental collapse. The area has since been restored although there is still clear evidence of the event and is quite something to see. 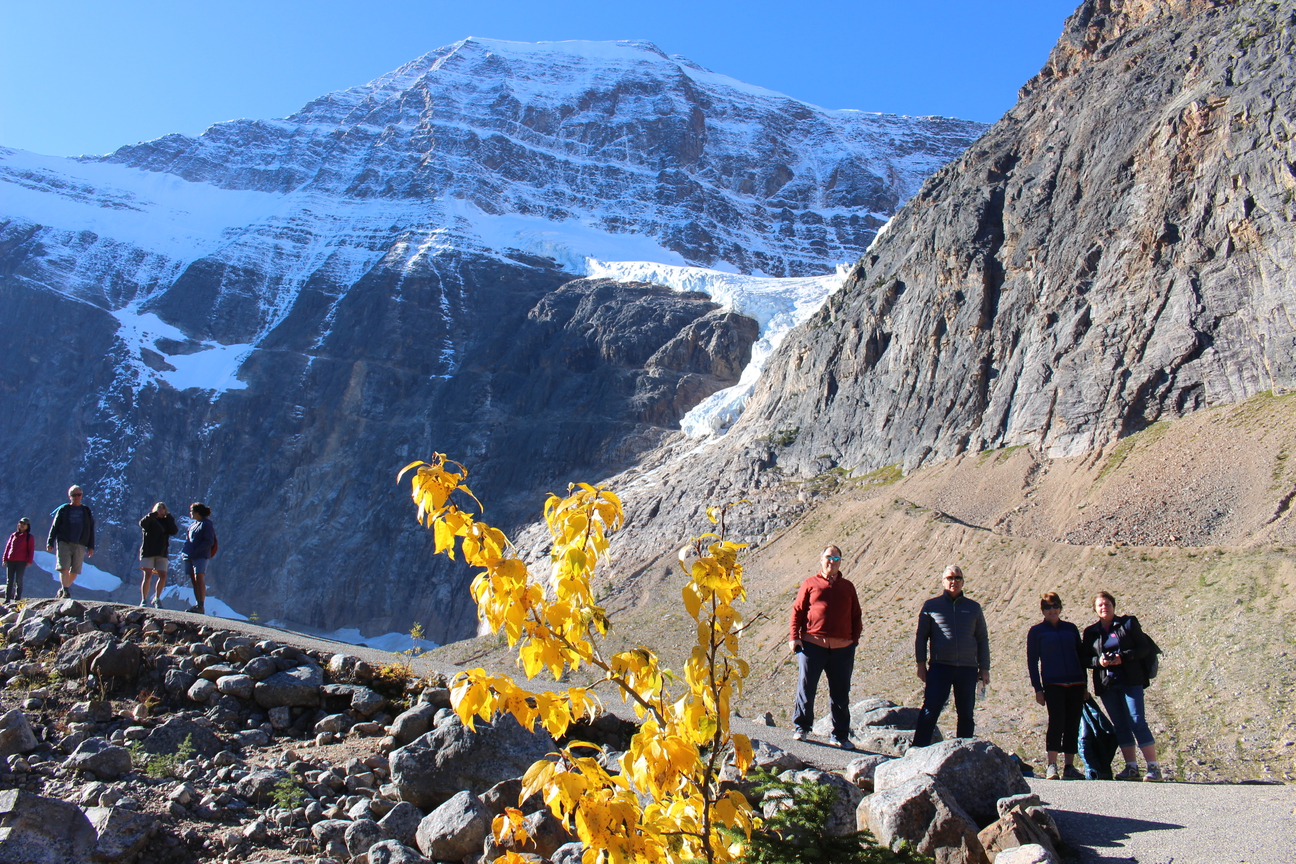 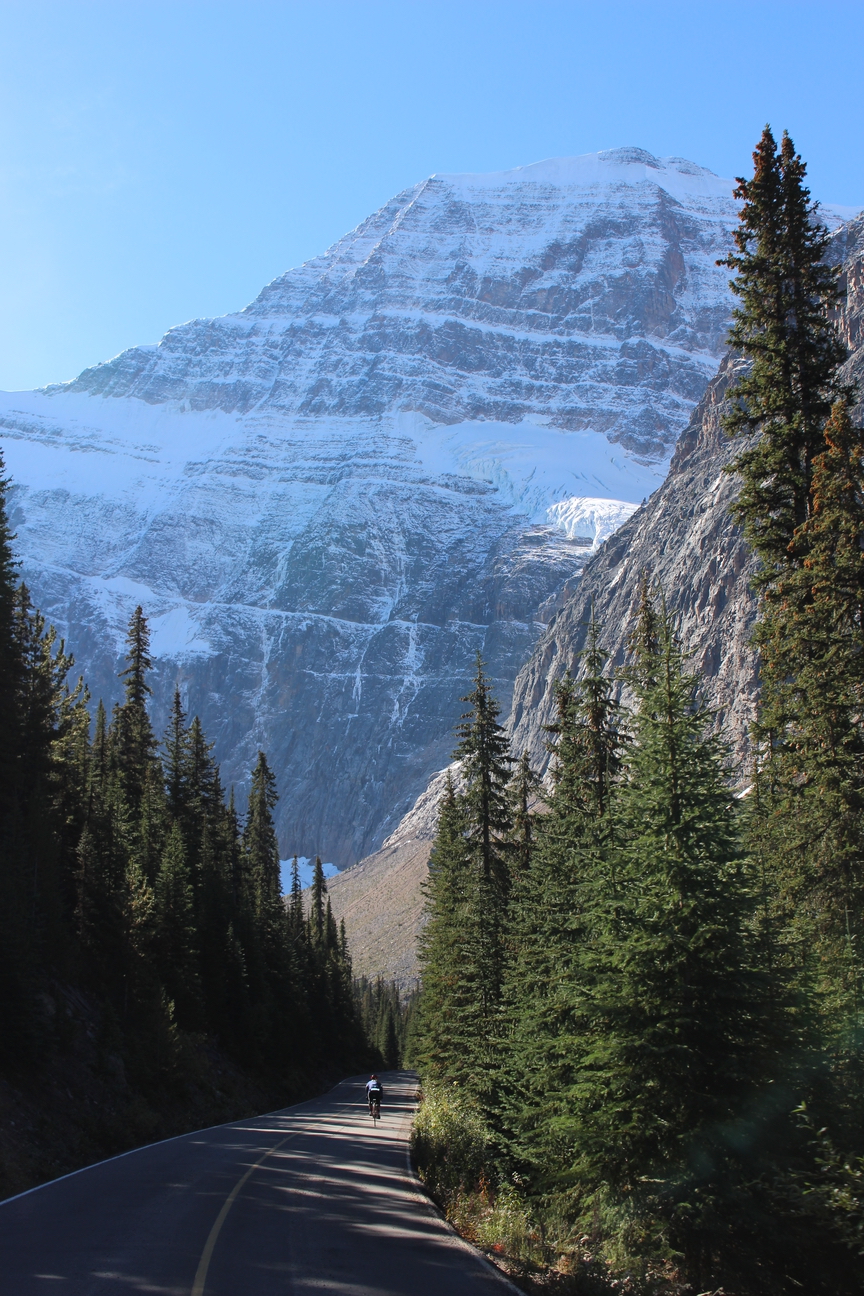 Named by Hudson’s Bay Company explorer James Hector after the company’s Chief Factor Richard Hardisty. Hardisty is credited for saving the life of missionary Father Lacombe in 1865 after he’d been shot in a skirmish between Crow and Blackfoot fighters. Hardisty took in Lacombe’s traveling party at his home in Rocky Mountain House, where he tenderly cared for them.

You’ll get a great view of this beauty shortly after leaving Jasper and we’ll formally regroup under it’s shadow at a great view point 25km into Day 1 of the ride just a few km’s before the first official rest stop of the tour at Athabasca Falls. 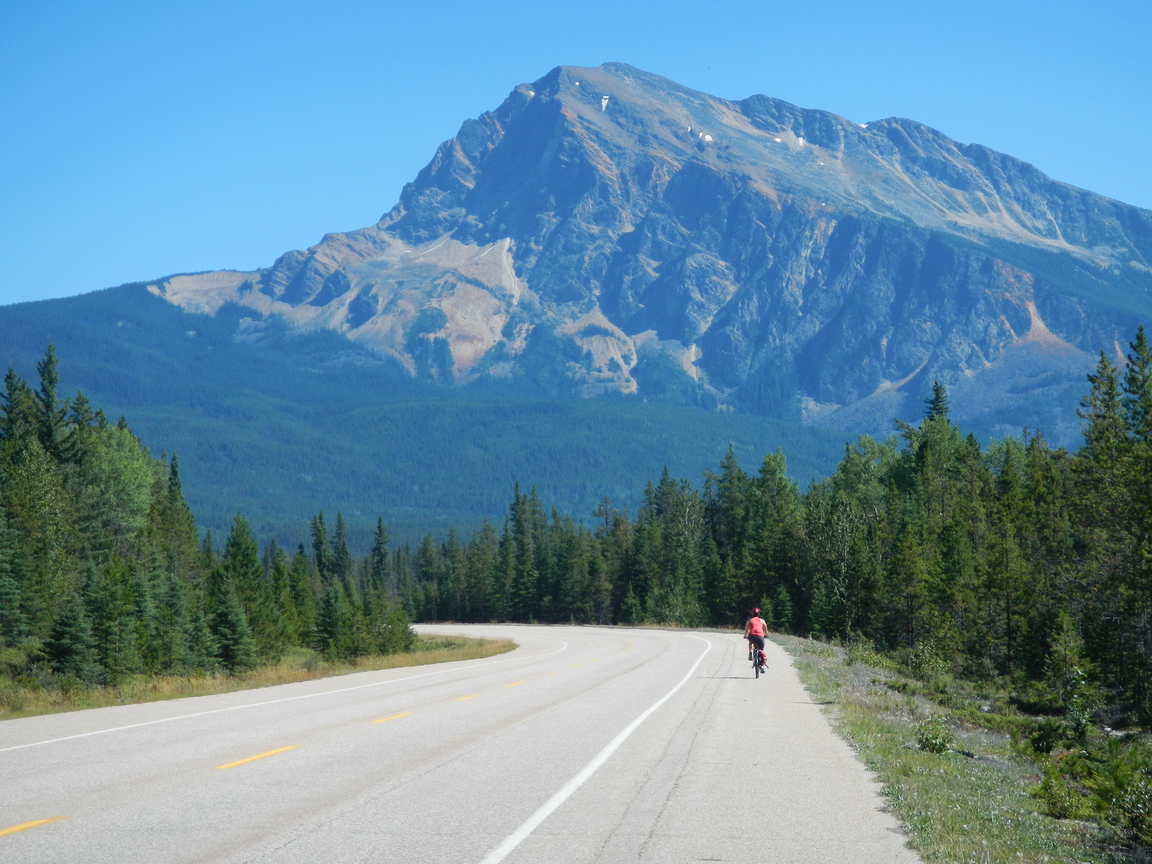 The river and its valley were named in 1897 by J Norman Collie and company. It was known as “Riviere des trous,” or River of Holes, by the voyageurs.

In January 1811, David Thompson needed to find a new pass over the Rockies because Peigan warriors would not permit him to cross Howse Pass, the usual route to the Columbia Valley. Thompson had traded with the Kootenay people and provided them with guns which their enemies, the Peigan, resented. So, Thompson was forced north to find another route through the Rockies. It was Thompson’s goal to follow the Columbia River to the Pacific and set up trading posts for the North West Company along the way.

A site known as Tie Camp along Whirlpool Valley near Jasper was logged for railroad ties in the early 1900’s.

On Day 1 of the tour around 25km from Jasper we’ll stop at a great view point that looks down the Whirlpool Valley at an amazing vista of Mountains, Rivers and forest. 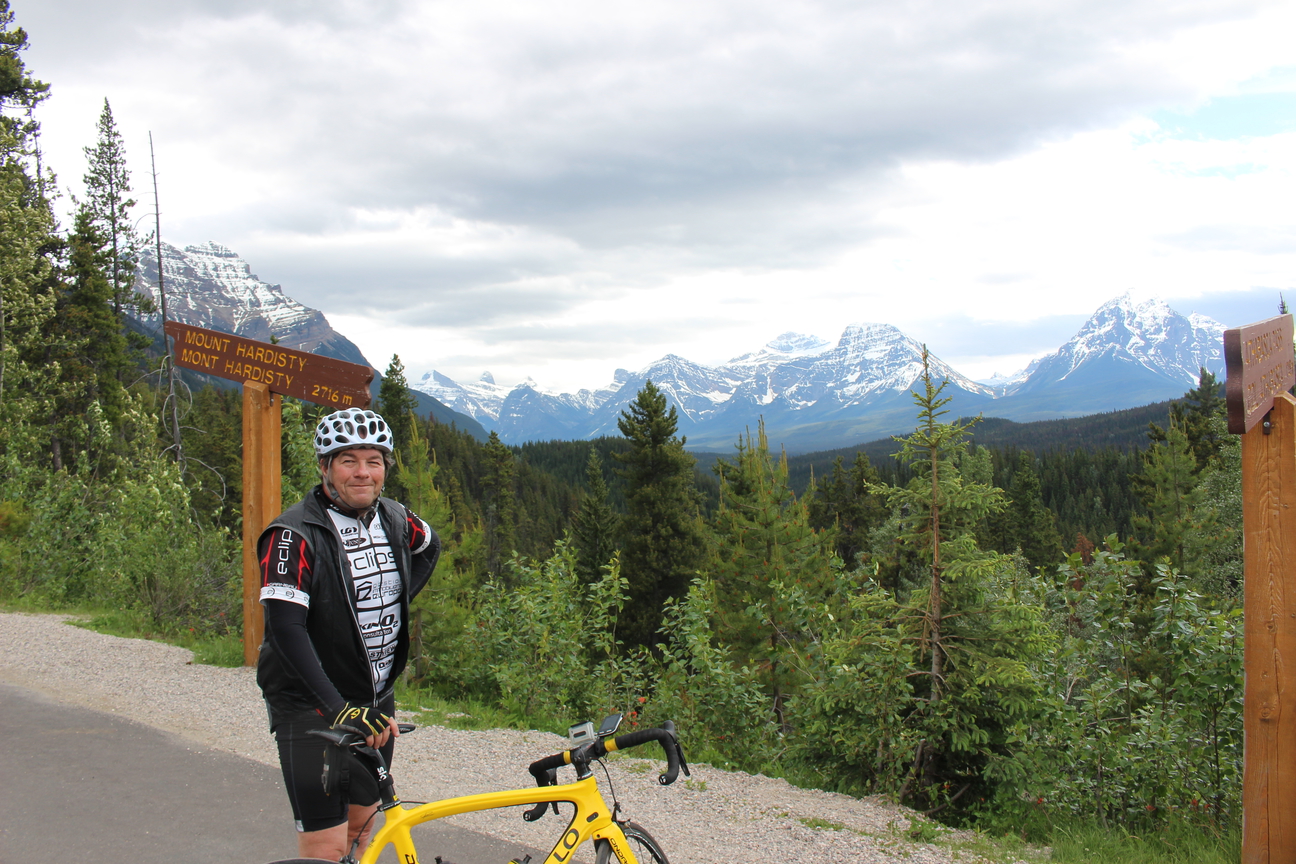 The nearest we can get to an explanation of how this peak got its name is from a description of an incident that happened in sight of this peak which James Hector wrote about in his journal on January 22, 1859. The Palliser Expedition team had trouble with a wolverine that could have spoiled their food cache. Hector described in graphic detail how the creature was shot by a member of their party. Perhaps his gory telling of the event is understandable when you consider the extreme difficulty that losing a cache of food might have meant for the expedition.

A derivative of Hector’s phonetic spelling of the First Nation word for wolverine, which he recorded as “ker-kes-shu,” was used to name the peak.

You’ll have a front row view of this amazing peak from our first rest stop at Athabasca Falls on Day 1 of the tour. Early and late season the snow clings to the mountains gently folding strata and is a sight to see with Raging Athabasca Falls in the foreground. 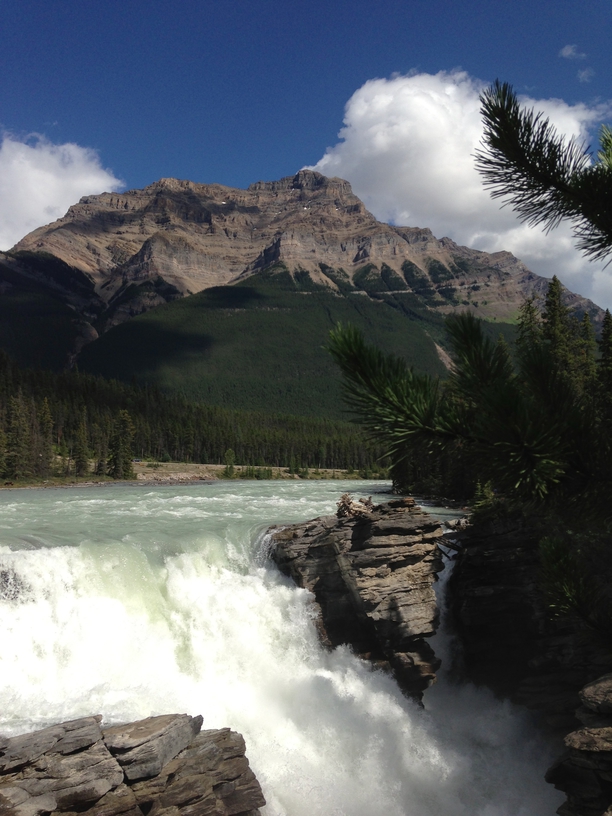 An example of a “horn” peak, Fryatt has been sculpted by glaciers eroding it from all sides leaving a horn shaped summit

Mount Fryatt was named in 1920 in honour of Captain Charles Fryatt, a ferry captain who rescued Allied troops during World War I. He was executed by German forces. His ferry, the Brussels, was an unarmed trading vessel. Across the valley, looking southeast from Mount Fryatt, is the ferry’s namesake, Brussels Peak. Brussels Peak is considered to be one of the most technical peaks to climb in this area.

7km after the first rest stop on Day 1 of the tour we’ll pop into a spectacular little view point called Goats and Glaciers (named this as it’s a popular spot to see Mountain Goats grazing along the mineral deposits looking for Glacial salts). From here you’ll have a great view of Mt Fryatt, Brussels Peak and Mt Christie along with the Athabasca River flowing far below on it’s way towards Jasper. It’s a panoramic view not to be missed. 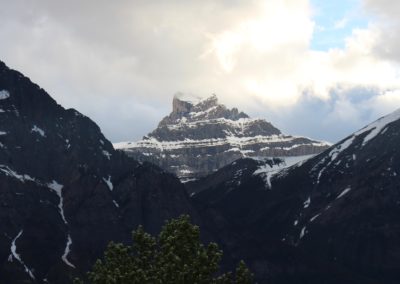 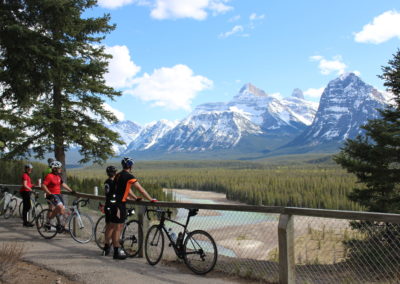 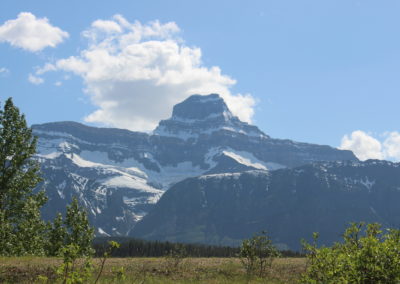 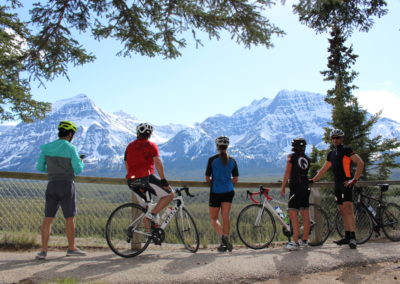 Mt Fryatt in the distance

We’re on Day 2 now and 20km after leaving Sunwapta Falls Rocky Mountain Lodge you’ll come across a large rock slide on either side of the Icefields parkway and you’ll notice all the rocks are pink and orange.

The pink and orange colour of the rubble in this slide is from iron oxide. It is thought the slide happened within the last thousand years since trees have not yet begun to grow over the slide area.

A study in 1989 counted 106 species of saxicolous lichens (lichens that grow on rock) in the slide area, some considered to be rare. Some lichens give the rock a grey colour. Otherwise, the Rockies would be as colourful as the Jonas Creek Rockslide. 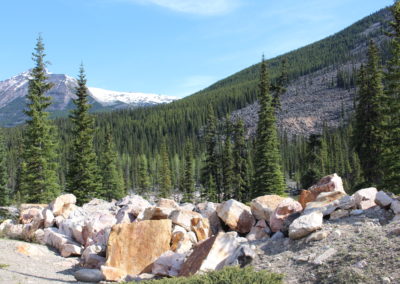 The rockslide from the Icefields Parkway 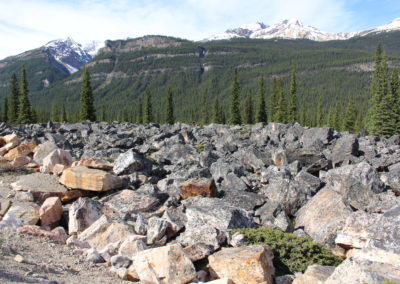 The rockslide continues on the other side of the road 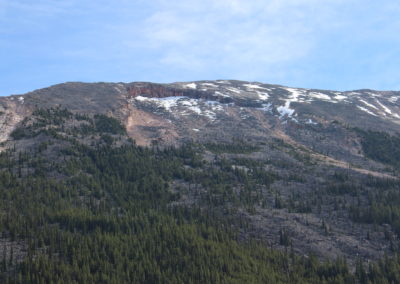 The mountain above the rock slide.

Shortly after leaving Sunwapta Falls Rocky Mountain Lodge on Day 2 of the tour you’ll notice that you’re following an impressive ridge on your left hand side.  It’s only when you arrive at the first rest stop of the day 30km down the road that you’ll likely look back and see how impressive it is.

The ridge spans a distance of about 25 km between Mount Kerkeslin and Poboktan Creek. Mary Schaffer named it in 1907.

Schaffer had first visited the Canadian Rockies from her native Philadelphia in 1889 with Charles, a physician and botanist whom she married later that year. She and Charles made many trips to the Rockies, often spending the warm summer and fall months there.

After the deaths of her mother, father, and husband within six months of each other in 1903, Schaffer returned to the Rockies in 1904 to continue working on the botanical guide her husband had been writing. With illustrations she created and the help of botanist Stewardson Brown, Schaffer’s book was published in 1907.

Mary Schaffer and her friend Mollie Adams hired guides to assist them on a quest to find a lake Schaffer had heard about from Stoney First Nations people. The excursion resulted in Schaffer’s “discovery” of Maligne Lake, which she later surveyed for the Geological Survey of Canada. Schaffer also lobbied for the inclusion of Maligne Lake in the creation of Jasper National Park. 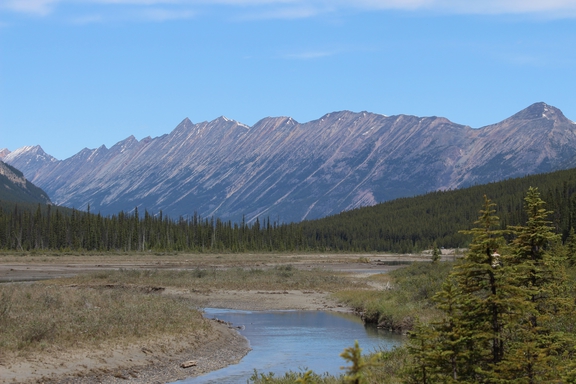 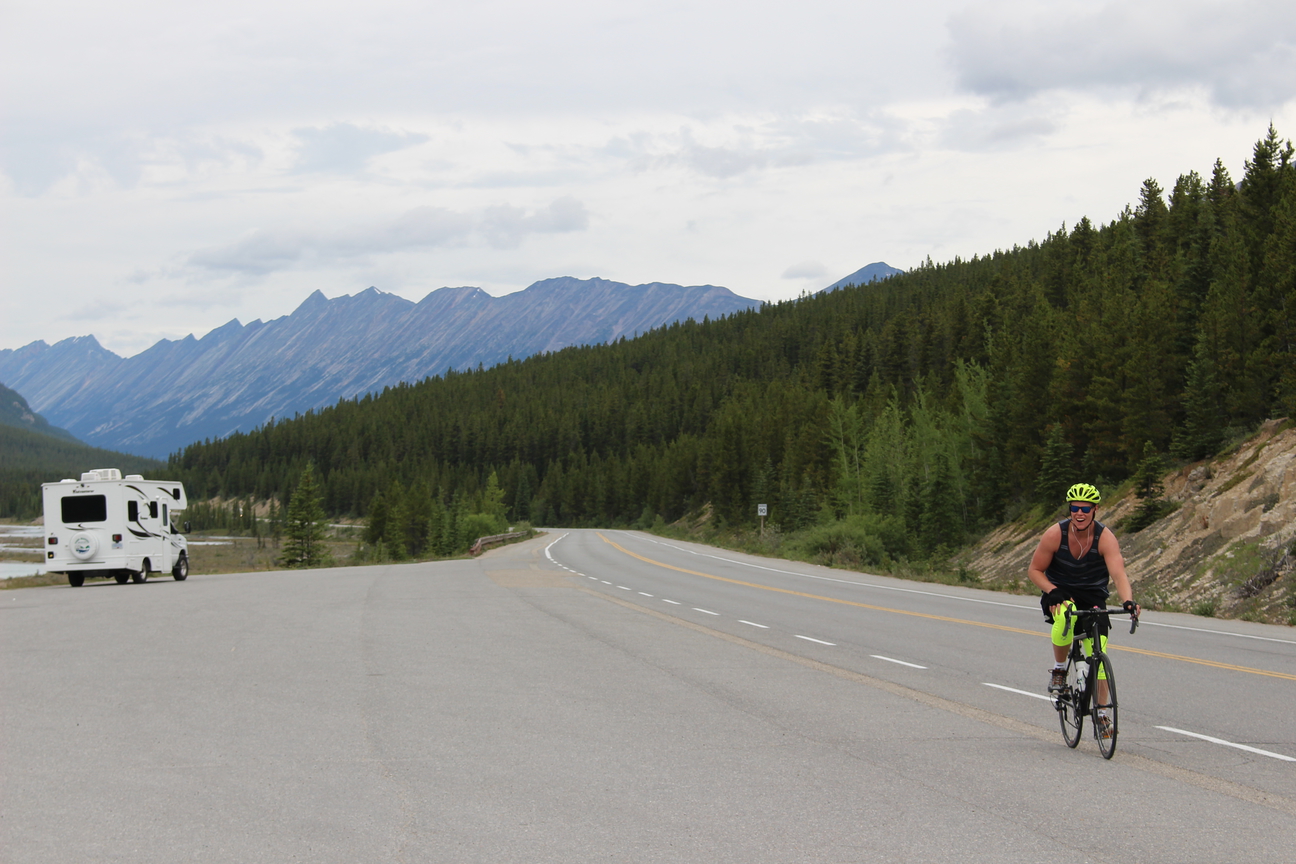 Mushroom Peak was first summited by N E Odell in 1947, climbing solo. Odell noted that the dark limestone rocks at the summit looked like mushrooms, hence the mountain’s name.

A diadem is a type of crown, specifically an ornamental headband worn by monarchs and others as a badge of royalty.
J Norman Collie and associates were the first to climb this peak in 1898.

It’s named after the 100-foot high crown of snow the climbers found at the top. 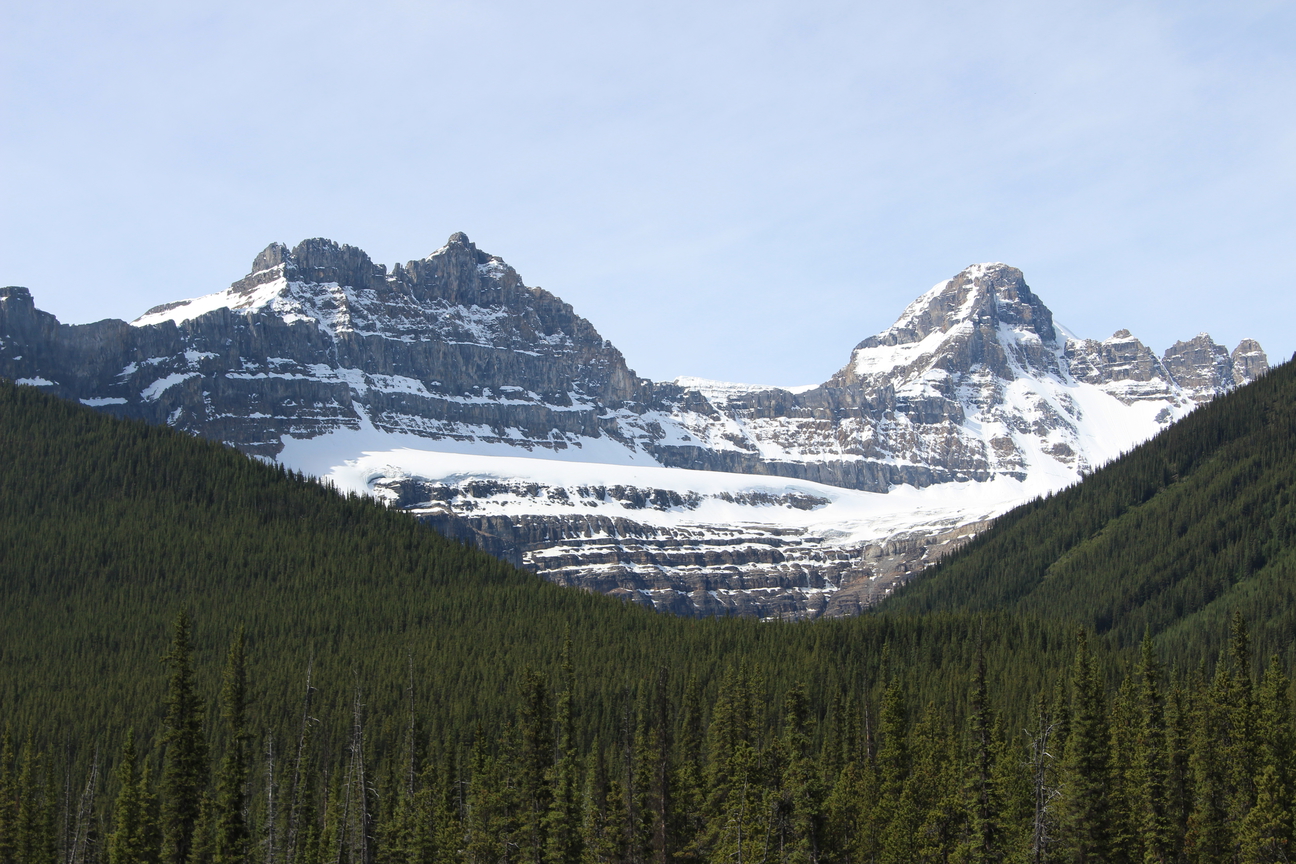 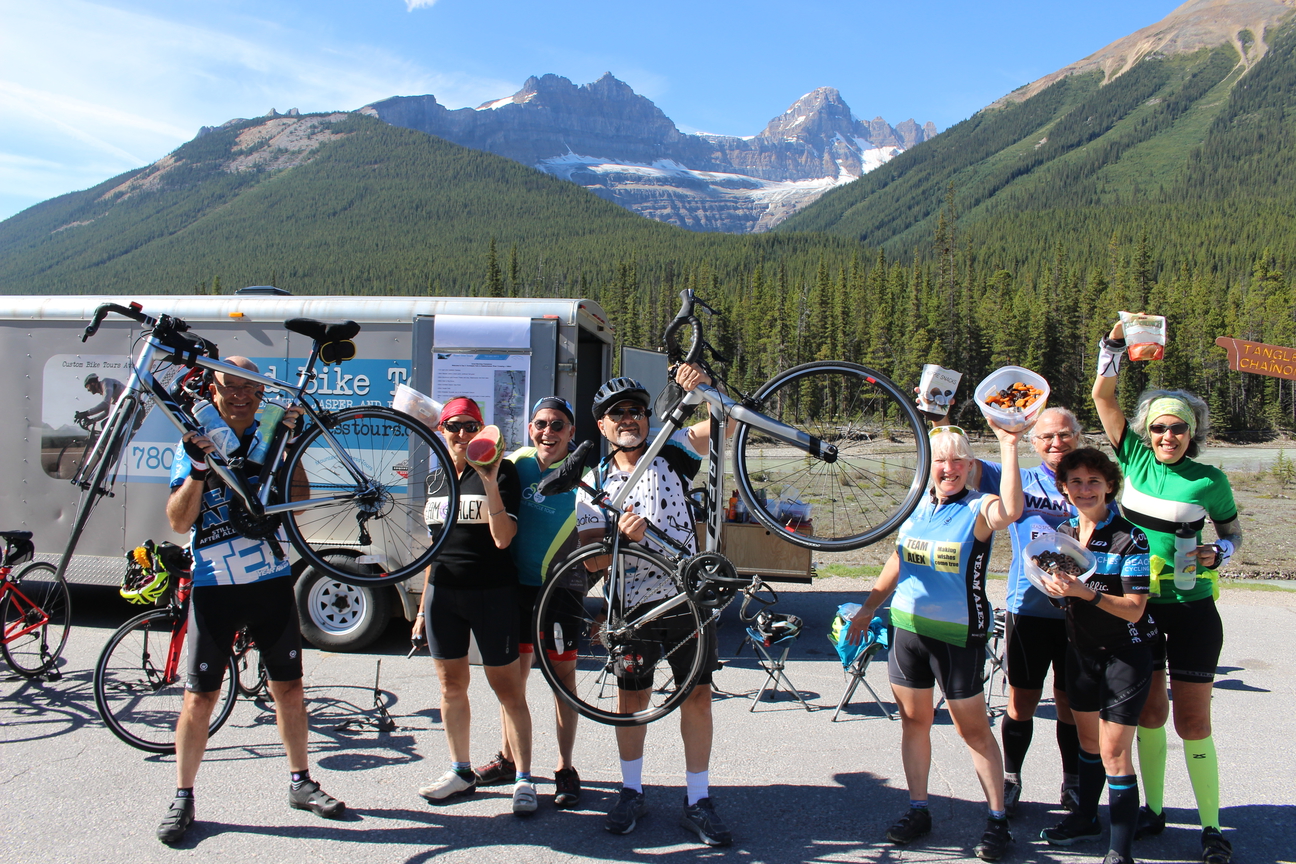 As you approach the first rest stop 30km after leaving Sunwapta Falls Rocky Mountain lodge on Day 2 of the tour if you look to the left you’ll see this beauty.

Sunwapta Peak and Canyon were named after the river which Arthur Coleman named in 1892. Arthur Coleman was a geologist, climber and explorer. He wrote The Canadian Rockies: New and Old Trails, which was published in 1911. The word “Sunwapta” is from the Stoney language and means “turbulent river.”

The legendary guide and outfitter, Jimmy Simpson, made the solo first ascent of Sunwapta Peak. 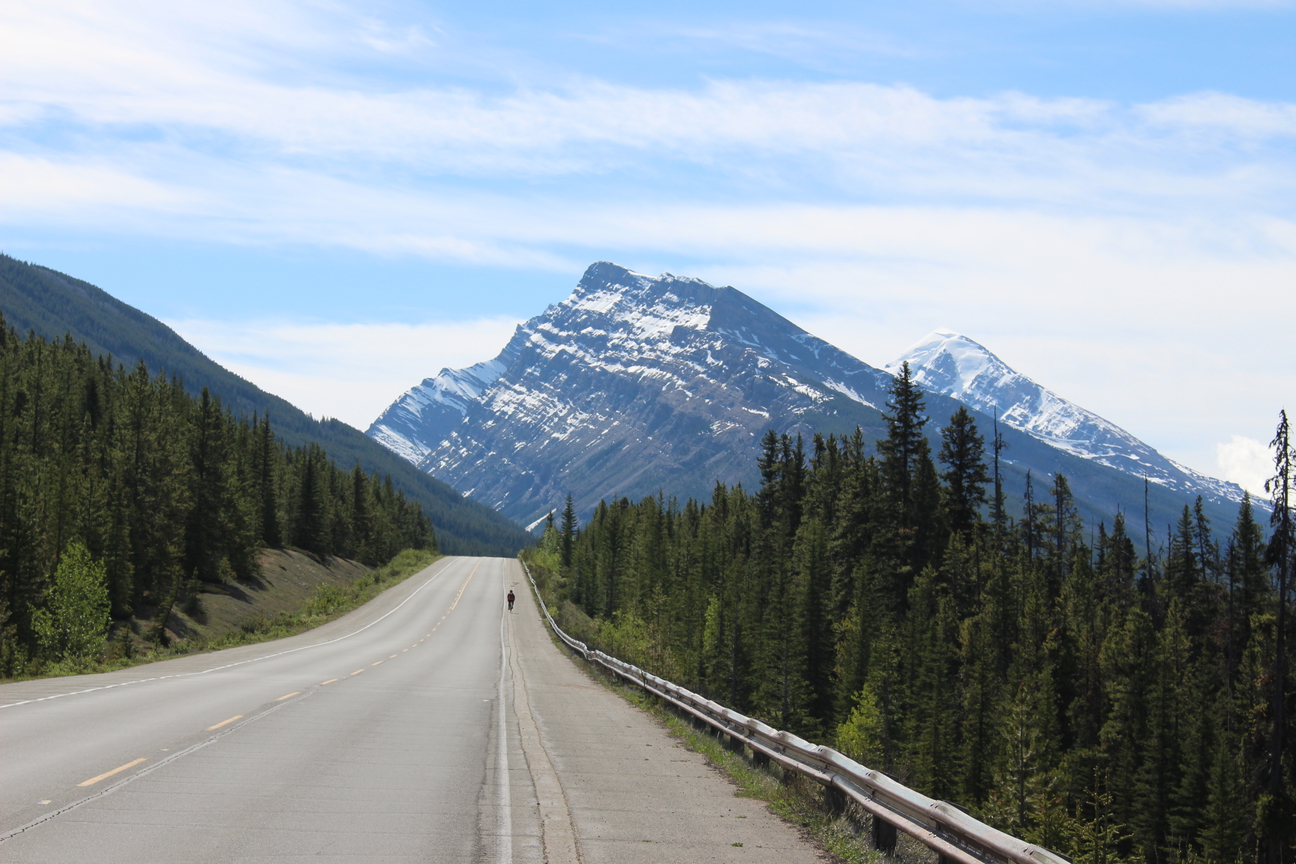