During your cycling tour you’ll be riding the 230km long Icefields Parkway between Jasper and Lake Louise.

The Icefields Parkway was named for its sprawling icefields and more than 100 glaciers.

As you ride along with no roof or windows to get in your way of the views you might wonder how and why this road got built in the first place.

This matchless alpine avenue is the end result of thousands of years of human contact with the environment in this part of the Rockies.

First Nations settlers and travelers, fur-traders, explorers, and adventurers past and present have all had an impact on this world-famous route between Jasper and Banff. 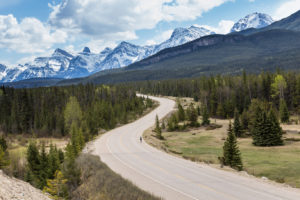 The Icefields Parkway winds gently through the Rocky Mountains